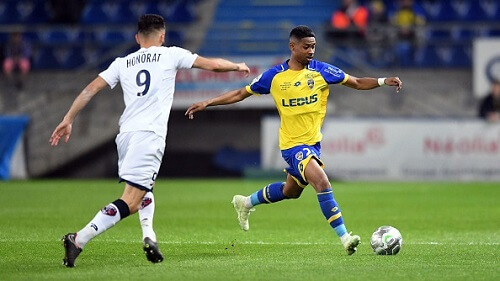 It is now official that the New York Red Bulls have signed Ligue 2 French left back Jason Pendant from FC Sochoux. The move comes after two weeks where youngster Christian Seagrist patrolled the left side of the defense to mixed reactions.

"First I'm happy to sign with RBNY," said Pendant. "It's a club that has won trophies, and where players like Thierry Henry Youri Djorkaeff have played. I can't wait to get started and help the team win more trophies. I'm very excited to play in this beautiful stadium. I'm eager to meet the fans, to see the atmosphere at the stadium and how they fire up the stadium."

Pendant debuted with Sochoux at the age of 18 and played the last four seasons with the second division club. Over that time he made 72 appearances while also breaking through to the French U-16 and U-18 national teams.

For the Red Bulls it is an experienced, young, defender that was desperately needed. Both Michael Amir Murillo and Kemar Lawrence departed the team. They also cut USL standout Rece Buckmaster while promoting Seagrist to the first time straight out of the MLS SuperDraft. Fans should expect Pendant to make his way into the first team as soon as he is eligible to play.

"Jason is a player that we think will fit well in our philosophy and team," said head coach Chris Armas. "Jason is an outside back that can both defend and attack. We are excited with the opportunity to work with him and he is another example of our team getting stronger."

New York's next game is over the weekend in Minnesota. It is unknown if Pendant will be ready to play by then as the player is still awaiting his international paperwork.