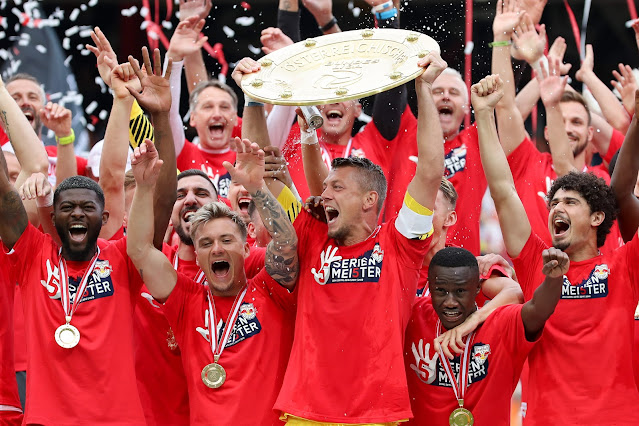 Jesse Marsch and Red Bull Salzburg have accomplished quite the feat in winning the Austrian Bundesliga and securing the domestic double. The win is the seventh league title in a row for Salzburg and the first for American manager Jesse Marsch, who battled an ever evolving lineup throughout the campaign.
"They are an unbelievable bunch," said Marsch after the win. "We have worked long and hard for it. It is a very special feeling for me."The celebration followed a 3-0 win over TSV Hartsberg where Patson Daka continued his scoring ways. It was yet another example of how dominant Salzburg have been since returning to play following the pandemic and how they were able to rally behind their new manager."In the end we won as a team," said defender Andre Ramalho. "What we have here in Salzburg is very special. We have team spirit and a real winning mentality."The 2019-20 campaign may have been one of the more difficult for Salzburg as LASK pushed them to the brink at the start of the year. A deduction in points for improper training kept the Linz-based club from seeing through their title challenge but the reigning champions still had improvements to make along the way.Key personnel departed the team midway. The roughest departures being Takumi Minamino and Erling Haaland. In their place stepped a myriad of options like Noah Okafor, Daka and Enock Mwepu. With a newfound confidence, it shouldn't be surprising if Salzburg make a more legitimate run at the Champions League knockout stage next season.Their winning mentality made them a difficult opponent in last year's UEFA Champions League and they will be joining that group once again as winners of the league. That opportunity is something that manager Marsch does not take likely as he spoke openly about returning to the team next season."I am staying here and have no plans to go," said Marsch. "I'm not finished here. There are plenty of challenges waiting for me and the team, and we want to always play in the Champions League."