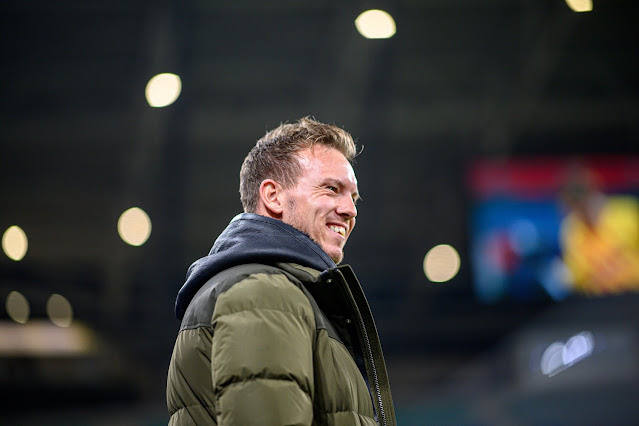 Julian Nagelsmann spoke highly of his team's ability to make their second German Cup final on Friday, giving him a chance to leave RB Leipzig with his first club trophy. The extra time win was an emotional roller coaster that saw team veteran Emil Forsberg score the game-winner.

"It was very emotional, which allows you to dig even deeper," said Nagelsmann about the game. "The lads have their hearts in the right place and deservedly won."

Nagelsmann will be taking over Bayern Munich next season, deflating the hopes of many fans in Leipzig that the young coach would deliver years of success. Instead, it has been hopeful but yet to deliver silverware. Now, as Munich comes calling, the sought-after coach is looking to leave on a high note by bringing the German Cup to the East German club for the first time in team history.

"I would really like to say goodbye with a title," said Naglesmann. "We're hoping that we play well in the final and seeing how hard the lads fought for both myself and the coaching staff after a turbulent week was really good."

The week was definitely an emotional ride for Leipzig fans who saw their beloved manager stripped away by the enemy they were looking to overtake. The previous announcement of top defender Dayot Upamecano leaving for the current champions as well added to the frustration. The win delivers some relief but they will need to lift the cup in order to have the dream send off for Nagelsmann.

Incoming manager Jesse Marsch will also be keeping an eye on the team. The fight they showed for Naglesmann is something he hopes will be with his club as well.

April 30, 2021
It took extra time but RB Leipzig advanced to the German Cup final with a stoppage-time goal from Emil Forsberg. The goal came after a goal-filled extra 30 minutes that saw Leipzig gain the lead, lose it and then advance to their second German Cup final in team history. Breman spent much of the game packing numbers in the defense and waiting for their chances on the counter. Leipzig, to their credit, moved the ball well and created chances but found that they lacked the killer instinct in the final third that has seen them win only two of their last five games. Half time substitutions did little to break the regulation tie but did wear down the Breman defense. The game's best chance came late in the second half when Christopher Nkunku rattled the post with a headed effort. Players grabbed their heads in disbelief as the scoreless draw dragged on. However, it was apparent that Breman was losing the defensive hold that appeared air-tight to Leipzig's efforts. The breakthrough cam
Post a Comment
Read more